We’re Open Daily! Please click here to review our new Safety Protocols & What to Expect at your next appointment. 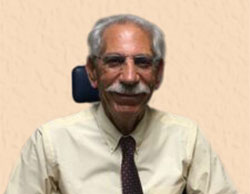 Dr. Shaby graduated from Queens College of the City University of New York with a BA in mathematics and Dr. Shaby ran the Bayside School of the Association for the Help of Retarded Children. He left AHRC to attend the State University of New York College of Optometry, from which he graduated in 1976, with a Doctor of Optometry degree. After receiving his degree, he joined the faculty of SUNY College of Optometry where he served as an Assistant Clinical Professor until he retired from the institution after 37 years. His teaching assignments included primary care, special testing, and for most of his tenure, vision therapy and developmental vision. After receiving his degree he concomitantly took a position as an associate with Dr. Richard Kavner in New York City, a practice specializing in vision therapy. He also served as vision consultant for the Churchill School in New York City, a school serving learning disabled children, and a consultant for United Cerebral Palsy in New York City. In 1981, Dr. Shaby opened a private optometry practice in Stamford, CT, where he continues to practice, with focus on children and adults with learning-related vision problems, wandering and lazy eyes, vision issues related to concussion, and traumatic brain injury. He has extensive experience in ocular disease and with contact lenses.

In 2017 he joined EyeCare Associates.